I love historical Christian fiction. So I was excited to get a chance to participate in the blog tour for the new book [amazon_link id=”1462037968″ target=”_blank” ]The Promise of Deer Run[/amazon_link] by Elaine Marie Cooper. The second book in the Deer Run series, the story is set 7 years after the Revolutionary War and explores a little bit of what soldiers might have experienced as they re-acclimated to life in the aftermath of the war.

Summary of The Promise of Deer Run

America’s war for freedom from England has been over for seven years, but the wounds of that conflict still haunt the minds and hearts of the residents of Deer Run. Young American veteran Nathaniel Stearns has withdrawn to a life of isolation as he awaits his father who never returned from the war.

A near-tragedy in the woods brings Nathaniel face-to-face with nineteen-year-old Sarah Thomsen, someone he had long admired but he assumed had eyes for another. This chance encounter opens a crack into the door of his heart as mutual affection quickly blooms.

But slander and lies soon mar the budding romance, rendering both Sarah and Nathaniel wounded and untrusting as their faith in both their God and each other is shattered. Set in 1790, this book continues the story of the Thomsen and Lowe families as they struggle to survive in the aftermath of the war that birthed the United States.

About the Author of The Promise of Deer Run:

Elaine Marie Cooper grew up in Massachusetts but now lives in the Midwest with her husband, her three dogs and one huge cat. She has two married sons and triplet grandchildren who are now one years old. The Promise of Deer Run is dedicated to the triplets and to veterans who suffer from Post Traumatic Stress Disorder.

Elaine has been a magazine freelance writer for many years, and is a regular contributor to a blog on the Midwest called The Barn Door and a blog on Christian living called Reflections In Hindsight. She is the author of The Road to Deer Run and the sequel, The Promise of Deer Run. Prior to becoming an author, Elaine worked as a registered nurse.

The Story Behind The Promise of Deer Run

When I was young and first heard that one of my grandfathers had been a Redcoat during the Revolutionary War, I was somewhat embarrassed. Growing up in Massachusetts had made me proud of our country’s heritage. But instead of finding zealous patriots in my bloodline, my DNA was from an enemy soldier named Daniel Prince!

Calmer reasoning prevailed, however, as I thought about the reality of his story. Living conditions in Colonial times were difficult, to say the least. It was a frightening period of our history for both Americans and the British. And in the midst of our nation struggling to be birthed, two people on opposing sides in a bloody war met and fell in love.

This story from my family’s history was transformed in my thinking into an inspiring one of romance, unhindered by the politics of the day. It became, purely and simply, a love story.

And so was birthed the idea to create a fictional account of actual events. Since the story is from my imagination, I opted to change last names, the names of the communities, and many other details of the time. However, many of the historical events are documented facts.

The particular information on Daniel Prince’s military background was discovered thanks to the diligent work of Betty Thomson, independent researcher at The National Archives, Kew, in England.

In book one, The Road to Deer Run and now in the sequel, The Promise of Deer Run, I made every effort to stay true to the colonial times. Descriptions of food, homes, clothing, farming, worship practices, medical care, etc. are the result of extensive research.

It has been a personally inspiring experience to write these novels. While the times have changed since the 18th century, the same struggles of their day are our own. Forgiveness, fear, pain, illness, despair, the pain of having a family member at war, the death of a loved one—these are all the battles we contend with in the 21st century. But we also share faith, laughter, love, the excitement of that first kiss, the wonder of looking at a newborn. These are the same joys that we share with our ancestors who are so much a part of who we are.

Their journeys are interwoven with our own.

My Thoughts on The Promise of Deer Run

I had not read the first book in the Deer Run series, but fortunately I found I didn’t have any problems following the story.  Although it was set in the Colonial period, the problems Nathaniel had in adjusting to life after the war are probably similar to those that soldiers experience today.  We have a family member who served our country in Iraq and came back quite a bit different after what he had seen.  Nathaniel reminded me of him in terms of his behavior.  So the characterization of Nathaniel  was spot on in my opinion.

I quickly became wrapped up in Nathaniel  and Sarah’s love story and was rooting for them to get together.  As is the case with many books I read, I ended up staying late to finish it.  Once I start a good book, I can’t seem to put it down.  I have to know how the story ends up!  All in all, it was a well-written, beautiful story and a fairly quick read.  Now I need to find the first book in the series so I can go back and read that.  Even if you haven’t read the first one, I recommend The Promise of Deer Run, especially if you like historical fiction. 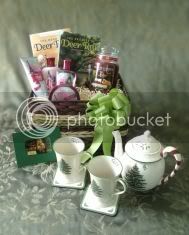 As part of the blog tour, one lucky Blog Tour visitor is going to receive a lovely Deer Run Grand Prize valued at $297 that contains

If you would like to throw your name in the hat, simply follow A Heart Full of Love in some way (GFC, Facebook, Twitter, or email updates), then leave 1 comment below telling me why you would like to read [amazon_link id=”1462037968″ target=”_blank” ]The Promise of Deer Run[/amazon_link].  Also be sure to include in your comment how you are following A Heart Full of Love and your username if applicable.  US 18+ only please, 1 entry per ISP.

On November 18, 2011 I will choose one finalist from all the valid comments left and forward that on to the sponsor.  A Grand Prize winner will be chosen by Kathy Carlton Willis Communications out of all the finalists from the Blog Tour on November 21,2011.

UPDATED – Kathy Davis is our finalist.  I have forwarded Kathy’s email on to the sponsor to include in the grand prize drawing.  Good luck Kathy!

Disclosure:  I received a complimentary copy of The Promise of Deer Run to facilitate this review.  I received no other compensation.  All opinions stated are my own.

This site uses Akismet to reduce spam. Learn how your comment data is processed.

Welcome to A Heart Full of Love!

Recipes, Crafts, Tips, and More for the 21st Century Homemaker!

I am a Southwestern Ohio Mom Blogger, Child of God, Wife to my High School Sweetheart, Mom to 4 Great Kids, Memory keeper, Crafter, Letterboxer, Frugal Shopper, Organic Gardener, Avid Cook and Baker... yep that about sums it up!

Receive our updates by email.

A Heart Full of Love participates in the Amazon Associates program as well as other affiliate programs. The links on this site may be affiliate links. This means that we earn a small percentage of any sales generated from these links. This helps to support this website. If posts are sponsored or if a complimentary product has been received for review, it will be stated at the beginning of the post.

Website Graphics from the Owl Always Love You Pack at Just So Scrappy.

The content of this blog is protected by US copyright law. Please do not use any materials from this blog without permission.